We are delighted to introduce Charlie Murray as our newest Sales Engineer at Scot Agri. Charlie has joined our team at Forfar and brings a wealth of experience from time spent in a variety of roles selling and servicing agricultural machines. We spent some time with Charlie to find out more about him and his new role. 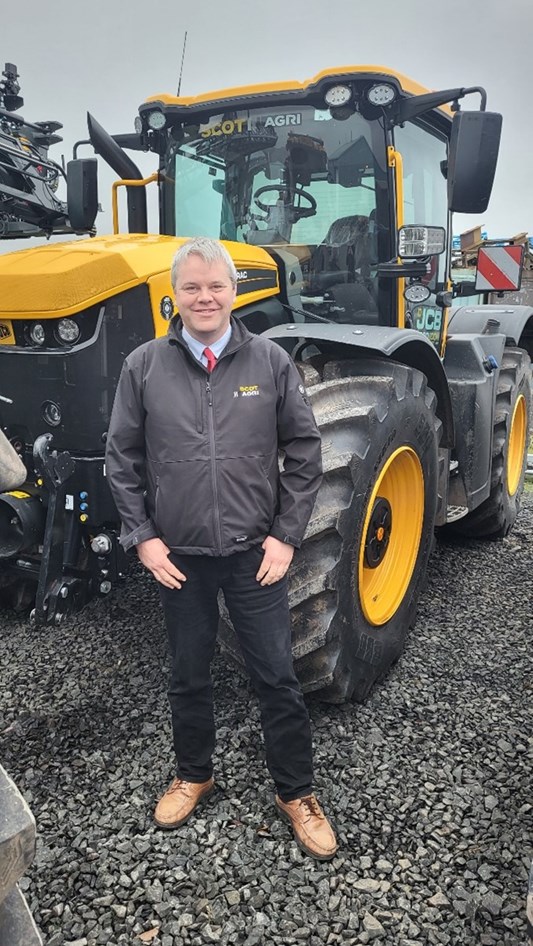 Charlie has had a vast career working in technician, servicing, sales, and dealer support roles throughout agriculture. He has a wealth of international experience having worked in the USA and New Zealand. Having won awards for his technical skills, and during his time with agriculture manufacturers, Charlie said these are some of “his biggest highlights and moments.” When Charlie chose to start a family, he changed to working in the Oil industry, which brought him more time to spend with his family compared to his earlier roles, although he added “I just knew it wasn't for me, so I knew I needed to be back in agriculture.”

He moved to a growing and harvesting factory in Montrose, where he worked his way to an operations manager position, but admits “Especially at Harvest time, that’s a 24-hour a day job.” Searching for more structure and to find himself back in a customer-facing role, Charlie joined the team at Forfar.

Charlie told us of his delight to be joining the team at Scot Agri “It has a great reputation. That’s what I want to be a part of. The people I am working with were a big tick and the customer I'm going to be dealing with is another big tick for me. Most of them know me, and I know most of them, but there are a few fresh faces to notice and meet and speak to. So, I'm just looking forward to getting back to it.”

When he was younger Charlie saw himself working in agriculture but from a manufacturer’s perspective. He admitted that it wasn’t as hands-on, or out in the air as he found with working as a technician or within sales for dealers, helping to form part of the reason for joining Scot Agri.

Finding himself back in a Sales role, Charlie added about his enjoyment of being back in a customer-facing role, being back outside, and seeing what is going on, adding “inside always taking me back to my school days.” Charlie told us a typical day sees him spend his mornings starting at the depot, organising quotes, and catching up with customers before heading out on the road, meeting customers, and organising machines and demos.

Charlie also said that he’s “happier to be working at the dealer role out with customers directly, you can build a great relationship with them.”

Excitement for the future

Coming from his technical background, Charlie shared that he is excited about the progress of alternative fuels in the industry as large climate issues take centre stage, “You can see how far forward manufacturers, like JCB, are thinking. Hydrogen and other alternative power sources are serious business. Manufacturers taking the lead and we are watching their innovation enter the market. I like to see the progression of technology; it will change the industry.”

His excitement about working in the industry is unquestionable. When asked what makes the industry different, Charlie said “It’s a passion, it’s not work. Everyone who works in the industry will tell you that. I grew up on a farm and have been involved in agriculture, it’s ingrained in you and everyone else around you feels the same.”

A family-oriented person at heart, Charlie spends most of his spare time with his family and two boys. He’s a fan of classic action films, citing James Bond or the most recent Top Gun as some of his favourites in recent memory. For music, he admits to enjoying Shania Twain, and “can’t believe she’s making a comeback with a tour announced for Glasgow.”

When asked about his favourite agricultural machinery, Charlie said “I’ve had a shot in the Fastracs, they’ve blown me away. Right now, I think it’s fantastic, and the perfect machine. I am historic and nostalgic for tractors I grew up with, like the vintage John Deere 3640 or 3650, but they’re not as easy to come by now!

Will Fleming, General Manager for Scot Agri North added “We are excited that Charlie has joined the Scot Agri team. He brings with him a host of excellent knowledge and experience which I am sure will help him hit the ground running.

If you would like to contact Charlie, you can call him on 07801 792928 or email him at Charlie.Murray@scotagri.co.uk

Welcome to the team, Charlie!